Knott quite the way I remember it

Last Friday we spent some time at a few of our favorite places in and around Orange County, including our mandatory annual visit to Balboa Island and Corona del Mar. Along the way we stopped off at Knott's Berry Farm, which I hadn't visited in so long that I could barely recognize it.

While my wife picked up a large jar of the world famous Boysenberry Jam, which had disappeared from our grocer's shelves about year ago, I picked up a copy of Jay Jennings' Knott's Berry Farm - The Early Years which was sitting by the cash register. It was printed by Arcadia Publishing and fully up to their usual high level of quality.

As I flipped thru the pages, I was somewhat surprised  at some of the statements about Knott's rides and Bud Hurlburt. The text praised Bud's honesty and ingenuity and left me with the impression that he personally designed and built most, if not all, of the early rides, in particular the Calico Mine Train Ride, Timber Mountain Log Ride and Antique Auto Ride.

Rather than jump to any conclusions, I decided to do a bit more research and headed out onto the web. There was a lot of material there, including an article from Yesterland. It stated;

"Hurlbut was an innovator, and his inventions, like flume rides and various motors, were adopted later by much of the theme park industry." "Unlike Disney, which has teams of talented Imagineers and other specialists to help create each new attraction, Bud had mainly himself to rely on. This is all the more amazing when you consider how much more elaborate, say, the Calico Mine Ride was in comparison to Disney’s Matterhorn—opened just a year apart from one another." 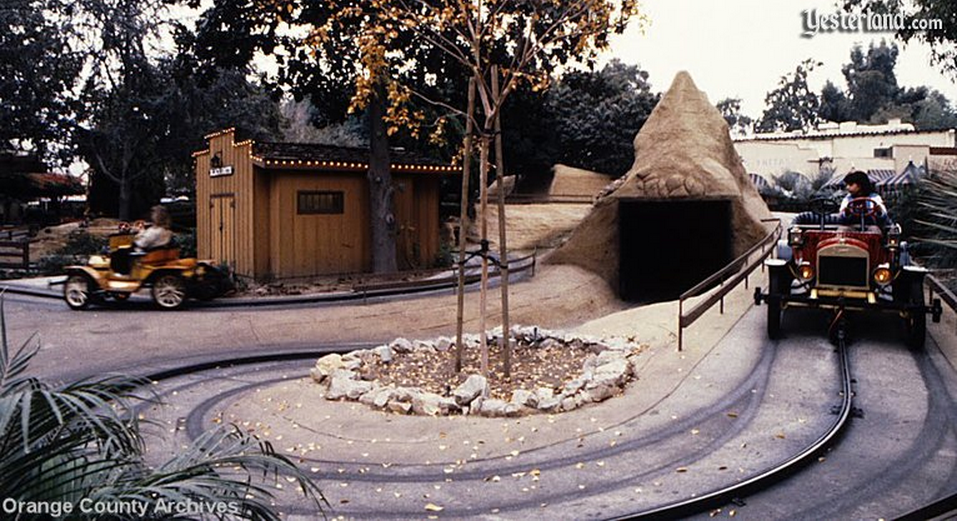 "Other Hurlbut attractions included the well-loved Antique Auto Ride, which was later renamed the Tijuana Taxi when that area of Knott’s was re-christened “Fiesta Village.”

Bud made sure the ride was not simply a car on a track, but that the passengers would experience an adventure going through all kinds of terrain and past a variety of colorful and amusing scenes."

Many of the older attractions in Fiesta Village also began as Hurlbut concessions. Many of these were relatively familiar rides from a mechanical perspective, but were made colorful and unique by Bud’s focus on appropriate theming and detail. 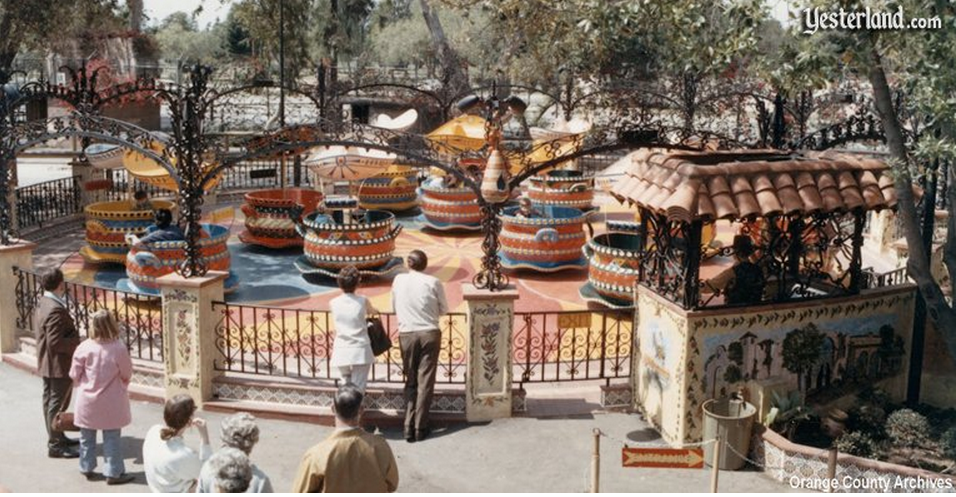 The photo above shows the Happy Sombreros, a “Tea Cups” clone that featured colorful chili bowls topped with huge fiberglass sombreros. Note that even the operator’s booth and wrought-iron fencing and arches reflect a sense of Old Mexico or Early California.

Now, I'll admit I tend to err on the side of literal interpretation when I read or hear things, but the message seemed pretty clear to me; Bud Hurlbut invented the rides at Knott's Berry Farm, nearly single-handedly. At that point alarm bells started going off in my head.

Among the documents Shane Huish shared with me was a seven page list of Arrow rides, dated June 1st, 1979.  It's typewritten and stapled in the upper left corner. Titled Arrow Developent Co., Inc. Ride Locations, It lists over 200 ride systems. There are five references to rides at Knott's Berry Farm; The first is in the Corkscrews section, line 4; Knott's Berry Farm, Buena Park California.

Next was the Steeplechase ride:

"This classic attraction, which opened at Knott’s Berry Farm in 1969, remains as one of the most elaborate log flume rides in the U.S. The much anticipated attraction opened in July 11, 1969 with screen legend John Wayne taking the inaugural ride.

The $3.5 million attraction was originally funded entirely by its designer Bud Hurlbut who had previously designed Knott’s Berry Farm’s classic Calico Mine Ride. Hurlbut, a pioneer in the theme park attraction industry, wanted his flume ride to be a completely immersive experience."

By this time, I had virtual steam coming out of my ears. I needed to sanity check myself, so I went back thru some original Arrow sales material I received from Walter Schultze's daughter Linda.

There, on the front cover of the December 1975 Arrow Flumes and Automobiles brochures were the two other pictures I knew I'd seen somewhere before. First the flume ride. I've overlaid it on top of the image on Knott's current web site for easy comparison; 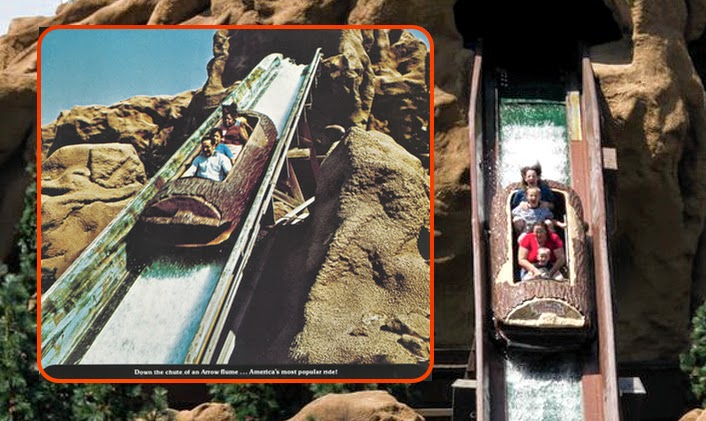 Next the Antique Autos. Again, the large image is the Knott ride and the insets are from the 1975 Arrow Automobile product brochure. The radiator on the Knott ride is more rounded, but the side lamps are identical. The Knott ride is also missing the convertible top. 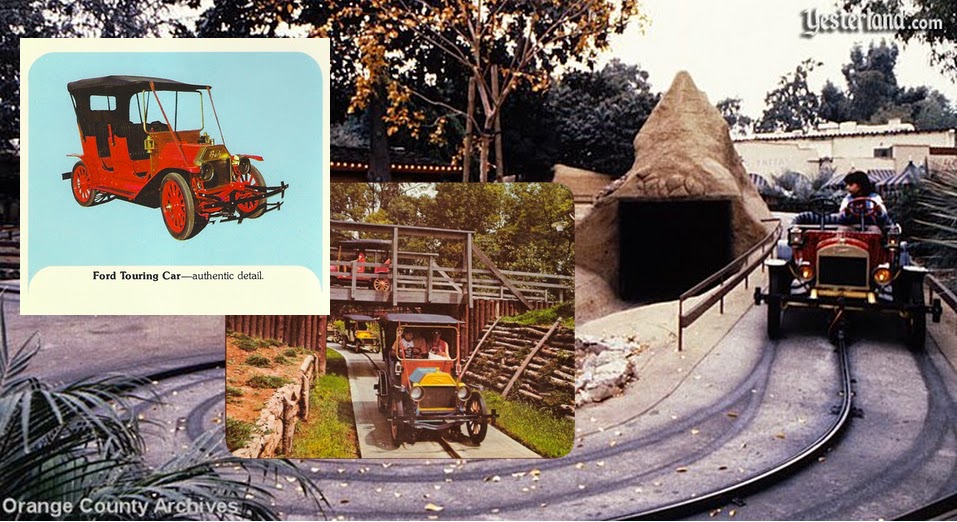 Next, I checked with Linda to see if Arrow did the Antique Auto ride at Knotts. She answered without hesitation;

"Yes, of course.  I remember going to Knott's with my parents when they were putting in the rides there."

There was just one more thing to check, on the Arrow 1979 ride list:

UPDATE:  I received a message from Werner Weiss which sheds even more light on the matter: According to Chris Jepsen, John Waite, one of Bud's close associates, says;

"After the success of the Mine Ride, Bud started to pursue the idea that he had about a ride where riders would ride a log type vehicle down a mountain slope (flume) and splash into a pond.  He had read books where it told of loggers doing this sometimes with fatal results.  He thought of a wheeled vehicle riding on tracks under the water.  He then realized that it was not a good idea to have all the wheels and everything under the water, so he approached his good friends at Arrow Development, Ed Morgan and Karl Bacon, about this idea.

Bud paid for the research that Arrow did up at their plant in Mountain View. He had successfully worked with them on the development of his Car Ride (at Knott's -df) that became one of Arrow's most successful rides at that time.  Bud kept in close contact with them on their testing of a free floating log boat.

Arrow built a 12' tall model of a drop into a channel of water up at their plant.  When they finally told Bud that they felt they could build a full sized ride, Bud decided he didn't want the first installation.  At that same time Six Flags Over Texas was looking for a new ride and asked Bud if he would let them put in the first Log Ride. Arrow paid Bud back all the money he had spent on experimentation and then opened the first Log Ride that Arrow ever built. (El Aserradero - df)

This original ride is still in use at SFOT. I think Bud's ride was the 6th or 9th one that they built, and it was the first one to be built in and around a mountain. I also think the logs for Bud's ride were the longest ones they ever built at 11 feet.

Bud had recovered his investment in the Mine Ride within two years and was doing so well that he could afford a larger investment now with the Log Ride. Bud wisely didn't like to take chances and that is why he wanted the Log Ride concept to be tested and proven. With the Mine Ride he was willing to go ahead on his own and develop his idea without another one out there to base his design upon. Bud understood trains but water rides were another story.

Posted by Thinking of Design at 10:45 AM