Down to the Wire

From the internal references, this article was written Thursday, July 14th, 1955, the day after the Disneyland TV program on progress at the park was broadcast on Wednesday, July 13, 1955. Disneyland opened three days later, on Sunday, July 17th, 1955.

Arrow Development Co., located at 243 Moffett Blvd., Mountain View, engineered and constructed five rides which were shown in the narrated film, along with other parts of Disneyland equipment in various stages of completion by other manufacturers.

"The film was made in April when we were in the process of re-assembling an old Merry-Go-Round and refinishing the carved wooden horses.” William Hardiman, company supervisor for the Disney work, said yesterday. (Wednesday July 13th, 1955 -df) “A camera crew and script man spent one day taking pictures of us at work.”

The Mountain View company’s rides to be featured on the TV program will be the Merry-Go-Round, decorated as a tent of King Arthur, complete with charging horses, Casey Jr., a nickname for “The Little Engine That Could”, a whirling ride called the “Mad Hatter’s Tea Party”, and two others called “Mister Toad’s Hotrod” and “Snow White.”

All decorations on the pieces were done at Disneyland. Only the design and construction of the basic pieces was done by the Arrow Development Co.

“Disney told us what he wanted and we had to get busy and engineer it.” Hardiman said. “Sometimes we had a sketch, but more often he just described what he had in mind and left us to really put it in some form.”

Casey Jr., a replica of a cartoon train engine, has bulging eyes which give the illusion of looking right at you. By using a chain pull, Casey Jr., will pull a six car train full of children up a 50 percent grade in Disneyland. His smoke stack is designed to roll back with the apparent strain of the pull up the hill, characterizing the story of "The Little Engine That Could.”

The "Mad Hatter” ride has six huge whirling cup and saucer “seats,"on each of three platforms which also rotate. The entire base of the ride goes around in the opposite direction, throwing the riders by centrifugal force against the sides of the teacups. This was designed completely from scratch by the Mountain View Company, on the basic idea of the tea party from Lewis Carroll’s “Alice in Wonderland.” Figures of the Mad Hatter and other characters fill in the center of the basic platform.

"Mr. Toad’s Hotrod” is based on the Disney film “Wind in the Willows.” People sitting in replicas of the hotrod, vintage about 1902, will ride through a dark tunnel illuminated with black light to produce such sensations as crashing through a fence into a hay field and colliding with a train. Another ride on the same idea is designed on the theme of “Snow White”, with conventional seats.

The last ride the company built for Disney, a “Dumbo Ride” left for Disneyland in Anaheim by truck late last night and will be decorated and installed there in time for the public opening Monday. Dumbo seats, flying ears and all, are attached to 10 rotating arms which also go up and down. The Arrow Development Co. designed and built the mechanism.

Representatives of the company this weekend will test all the equipment they built, which is now installed in the park.

(Talk about a short Installation and Test cycle! -df)
Posted by Thinking of Design at 9:44 PM 1 comment:

One of the unsolved mysteries about Arrow's early ride systems was the nature of the "San Francisco" style trolley. Thanks to Bill Hardiman's grandson Michael, we now have pictures of a train that sort of looks like a trolley, but there is more to the story.

This train appears somewhat like the streetcars which have served the City By the Bay for decades, but on a miniature scale, matching that of Arrow's streamline locomotives.

Note also the names Mickey, Donald and Limited on the side of the cars, which may be more evidence of Arrow's tight relationship with Disney. These images were shot at an Arrow Playland demonstration park in San Lorenzo Village, in the East Bay. The fire station is visible across the street in the third image.


The Enchanted World of Old San Francisco was for a dark ride on Fisherman's Wharf in San Francisco, done by Sid and Marty Krofft, next to the Wax Museum.  As seen in the images below, the cable car was the ride vehicle thru the attraction. 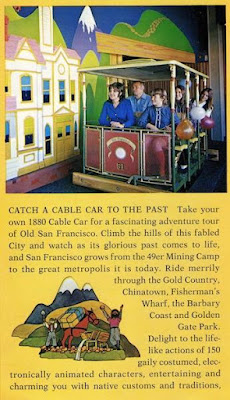 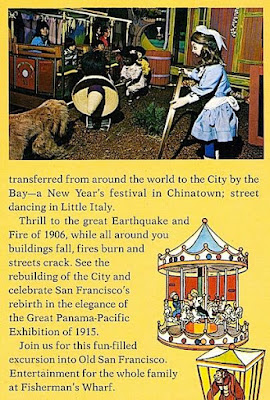 Posted by Thinking of Design at 5:39 PM No comments: