Much to my surprise and delight the Summer 2002 Issue of The "E" Ticket Magazine has a ten page article in it about Pacific Ocean Park with some nice photos and text with a scene by scene description of the ride;

"Rolling thru the Longhouse area, the six plantation type Banana Trains (built by Arrow Development) were beautiful ride vehicles. The open passenger cars had exteriors authentically faced with bamboo, and carried fifteen passenger each. The trains had a very different appearance because the cars were pushed from behind, along the spindly track, by the little thatch-roofed locomotives. The down sized "steam engines” were actually electric, but convincing enough, with their self contained water tenders, copper boiler jackets, diamond stacks and operators shaded from the sun by palm branch cab covers. 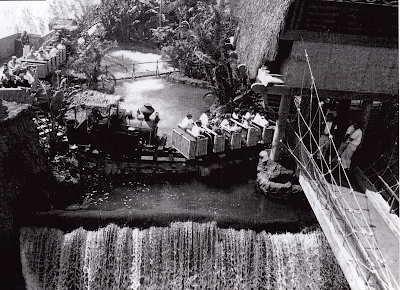 One after another, the Banana Trains loaded passengers,“steamed” from the high-roofed longhouse and into the tropical “South Seas” jungle ahead. The track followed a figure eight on this tropical fun trip, run by a beachcomber, around the island from one thrill to another. The return track descending from the mountain and crossing above the outbound section. The railroad’s light rail was crudely laid on thin, wide spaced ties which inspired very little confidence as you looked down from the first car, and watched it flex under the weight of the train. 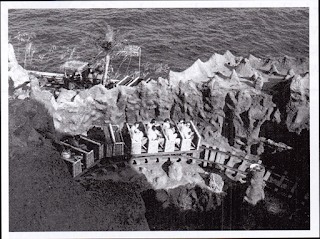 The track led a winding path through and under native thatched huts on stilts (where a few menacing "New Guinea Headhunters” threatened from the rafters. Then it plunged into the “authentic South Seas vegetation" ahead. A display of tribal dancing in a bamboo fenced village was next seen along the right, before the tracks began their climb up the rocky slopes at the base of the volcano. As the Banana Train ascended, it passed a group of “carnivorous vultures,” nesting among the rocks, which glared with hunger at the passengers. 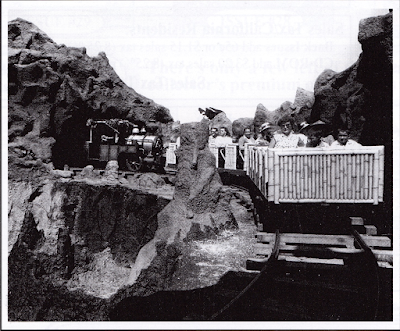 The train then entered the first several dark tunnels in the mountain. Out in the sunlight, framed by the curving spiral of track, the “live” volcano’s pots of bubbling lava could be seen within the cones of the cauldrons below. Twittering bats, thunder and lightning, a noisy “tropical rainstorm” and an “earthquake” were among the excitements enjoyed by the passengers before coming out into the sunlit center of the volcano, thru a short tunnel, then out again in the fresh ocean air, the Banana Train creaked over the spindly track and trestle onto a short section directly above the Pacific Ocean. 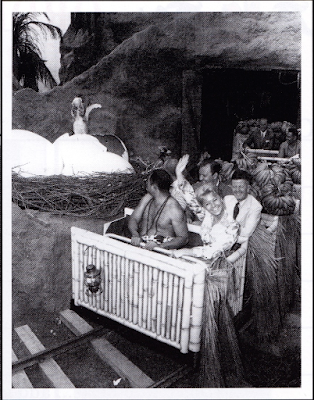 You weren’t out there long, but there was time to stare down at the water, towards the lights of Santa Monica Pier, then back into the tunnel ahead. The train then descended past the huge nest and broken eggshells of the Gooney Bird, who flapped and shrieked “Hello… hope you enjoyed your trip.” at the passing trains." 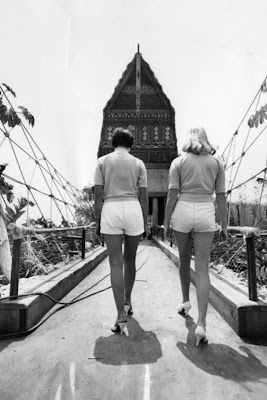 Posted by Thinking of Design at 8:12 PM