From the very beginning Arrow Development was working on and with cars. One of their first jobs was making hard to find replacement parts for a tiny Fiat Toppolino in 1948.  At the same time, Arrow was developing one of its first kiddie rides; a small portable carousel featuring tiny pill bug like cars, a few of which are still running in San Jose's Alum Rock Park. They weren't much more than bodies with fixed axels and wheels. The carousel turntable pulled them around and there was no way to steer or brake.


One of their first powered cars was the ArrowFlite.  Not only did Arrow do the vehicles, they designed and built a gas station, complete with a pump and a lift. The cars featured twin steering wheels, although they didn't actually work, as the car ran on a single track which provided both power pickup and guidance.

The the center guide rail system Arrow developed on the smaller cars was adapted for use on their larger sports and antique cars - which caught Walt Disney's attention when the early Autopia cars and track were taking a beating at Disneyland. Arrow's steering system used a variable width center guide to keep the cars from running into the curbs. Walt visited the Santa Cruz Beach Boardwalk to have a closer look. Soon thereafter Arrow was hard at work on the 1963 Mark IV Autopia upgrade. This was supplanted by the Bob Gurr Corvette like body in 1967, but the center guide remained and is still in use in Anaheim and Orlando.


At the same time there were plans afoot for antique car rides for the 1964 Worlds Fair. Arrow provided the vehicles and track for the Avis Antique Car ride, described in the official guide;

Open-topped antique cars, reproduced to five-eighths scale, provide a pleasant ride through an old-fashioned country setting. Each car seats up to five, and anyone 10 years or over can drive. A single pedal - accelerator and brake combined - controls the one-cylinder engine that pushes the cars along at a top speed of four miles an hour; the ride takes four minutes. Avis also operates a rental service for automobiles and power boats at the Marina landing.


There is interest in preserving and restoring these vintage rides, both antiques and sportsters. It is often a daunting task of love moving from a rusted chassis to a restored work of art and auction prices can reach - and sometimes exceed - those of a new, much more modern automobiles.

Note the information sheet is headlined by our blog banner (!)

Today Arrow's fingerprints, or perhaps shadow are still on the Autopia.

I'd love to see Disney partner with Tesla and convert the attraction to all electric, with solar panels on the roof, of course, rather than running single cylinder gasoline engines. That would be both future and retro, as Arrow had battery operated versions of it's cars too, some of which were built by Morgan Manufacturing when Ed Morgan's son Dana started his own company.

Posted by Thinking of Design at 7:19 AM 4 comments: 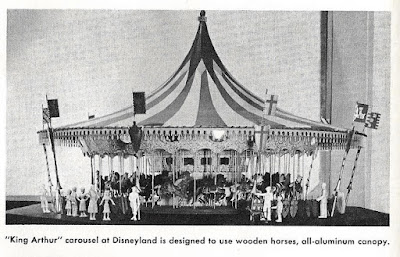 The story of the creation of the King Arthur's Carrousel, like the story of its namesake king, is the stuff of legend. Thanks to a recently disclosed document, we also have a better idea of how much Disney paid Arrow Development for their engineering work, which involved completely renovating and enlarging the carousel from Sunnyside Park in Toronto, Canada.


The Sunnyside Park Dentzel carousel operated from 1922 to the mid 50's. Although some sources claim it was built in 1875, there are no records confirming that. Originally a three row model, with the outer row all "standers" it became the foundation for another piece of Walt's dream.


Without increasing the diameter of the turntable, Arrow Development added another course and converted all the horses to jumpers, like the 1926 Spillman carousel which Walt loved at Griffith Park.  This doubled the mechanical load on the drive mechanism, as every crankshaft had to be lengthened and modified to drive two added rows of jumping horses.  By this time Arrow had plenty of experience, having built several other carousels, up to 45 feet in diameter.

Five of King Arthur's horses came from the carousel from San Francisco's Playland at the Beach, just a few miles up the peninsula from Arrow's shop in Mountain View.  Four of those - the ones with the broomstick tails - ended up on King Arthur's and one was given to Disney Imagineer #1; Roger Broggie. That makes the King Arthur figures a mix from Sunnyside, Ward's Kiddieland from Coney Island, and Loof and Dentzel horses from Playland in San Francisco.

The Playland Carousel was built in 1906 by renowned designer and craftsman Charles I.D. Looff and intended to be installed in San Francisco, however the great 1906 earthquake and fire put that plan on hold.  In 1907 it was installed at Luna Park in Seattle. It finally made it to Playland-at-the-Beach in 1913, where it operated for nearly 60, years, until 1972. The carousel was next purchased by a private collector who put into storage.  In 1998, it was purchased by the City of San Francisco.


There appears to be some confusion about provenance because there were two Luna Parks, one located at Coney Island and the other in Seattle. The Looff Coney Island, Luna Park, Broadway Flying Horses Carousel was built in 1890 and ended up at Shoreline Village in San Diego.

Arrow converted the third row standers on the Sunnyside Park Dentzel to jumpers by removing their legs and carving new ones. The chariot benches were removed and their woodwork was re-purposed to decorate the "calliope" tenders and passenger cars of the Casey Jr. Circus Train.  A Wurlitzer #157 Band Organ face was used as decoration, and motifs from  Sleeping Beauty were also added.


According to an article in E-Ticket Magazine King Arthur's current horses are all "outside row" quality.  There are mounts for 72, which enables a rolling maintenance schedule of four-on-four-off, which also explains why horses will appear to change location from time to time.


A Disney expenditure authorization document dated May 5, 1955, gives some added details regarding the level of effort involved in the creation of the King Arthur Carousel;

To cover the additional amount of $5000.00 in authorizing the total amount of $20,000.00 for modification work being accomplished by Arrow Development Co. on the Carrousel for Fantasyland.

This increase is based on re-estimations of the "Estimated cost to complete",  per Arrow Development Co. of 5/1/55.

These figures and dates add some fascinating details to our understanding of both Disneyland's development costs and schedule and the history of Arrow Development. Changes to one of the anchor attractions were still under way as late as May and the budget for it had grown by 1/3, with two months of work still remaining.

Fortunately the Playland Carousel has been restored and is operating again in San Francisco at the Children's Creativity Museum. Its still not clear where the five Dentzel horses which made it to Disney came from.  Perhaps the good folks at Playland-Not-at-the-Beach can shed some light on the matter, as they have much of the documentation from Whitney's Playland.

By the way, for some absolutely stunning Illions carousel horse images visit the Carousel History page.  Thanks to Patrick Wentzel for additional research and corrections - df

Posted by Thinking of Design at 5:43 PM No comments:

Disney Imagineers are noted for their painstaking attention to detail and Big Thunder Mountain Railroad at Walt Disney World is no exception. The preshow que area is filled with real and Imagineered artifacts, but this one caught my attention because of its association with Arrow Development.
Before Andy Anderson, Karl Bacon, William Hardiman and Ed Morgan founded Arrow, they worked together at the Joshua Hendy Iron Works in Sunnyvale.
The Joshua Hendy Iron Works was founded in San Francisco in 1856, initially to supply equipment to the placer miners hoping to strike it rich in the California Gold fields. The Hendy factory would become leading supplier and manufacturer in the mining industry, supplying ore carts, crushers, stamp and ball mills to mines around the world.
Upon Joshua Hendy’s death in 1891, the company was taken over by his nephews Samuel J. and John H. Hendy.  Samuel died in March 1906 and the Great San Francisco Fire and Earthquake destroyed the factory in April.  Hendy relocated down the penninsula, to Sunnyvale, lured by an offer of free land.

By the late 1930s, the company was in deep financial trouble,  with only 60 employees. Hendy was in receivership when Charles E. Moore established a controlling interest in 1940 and started to land contracts with the US Navy for torpedo tube mounts and marine steam engines.

Eventually Hendy’s employment rolls would swell to over 11,000, as crews worked around the clock to fill the wartime orders. By June 1943, the unions were pressing for reduced overtime and threatening work slowdowns, which Karl Bacon and Ed Morgan would recall as part of their reason for striking out on their own, starting Arrow Development, initially as a machine shop and used machine tool vendor.


Their jobs at Hendy provided Karl and Ed valuable experience in welding, casting, machining and design, which would prove useful on their carousels, boats, miniature trains and kiddie car rides. Even Hendy’s stepped, mansard style roof would be  reprised on Arrow’s first building at 243 Moffett in Mountain View. 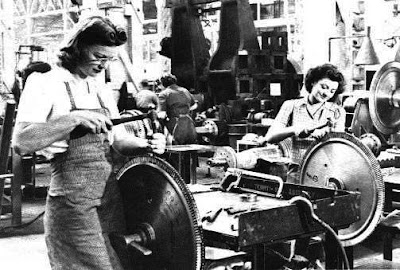 We don't know the name of this wartime Hendy "Rosie" installing steam turbine blades, but she has remarkably well developed - and hairy - forearms! (;-)

Posted by Thinking of Design at 1:58 PM No comments:

Original documents related to the early days at Disneyland still surface and provide interesting insights. A file copy of an expense authorization dated April 8, 1955 gives some clues regarding costs associated with Dumbo and The Mad Tea Party attractions;

The Balance entries reveal that there was still $19,766 remaining on M.T.P but only $981 on Dumbo. With the Park opening just over three months away, there must have been both a cost overrun and a schedule slip well under way. We've told story of Dumbo's opening day performance in another post.

Walter Schulze, the MBA behind Arrow's eventual financial success probably had the original, signed copy of this in his filing cabinet, but his daughter Linda says all those documents were discarded years ago. Enjoy this little peek into Arrow and Disney's earliest days. 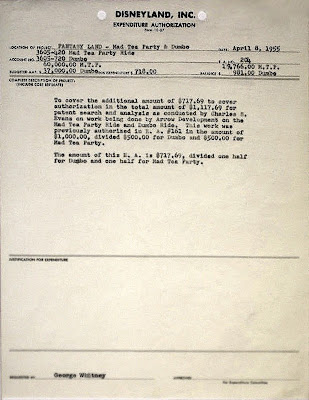 Posted by Thinking of Design at 6:14 AM No comments: