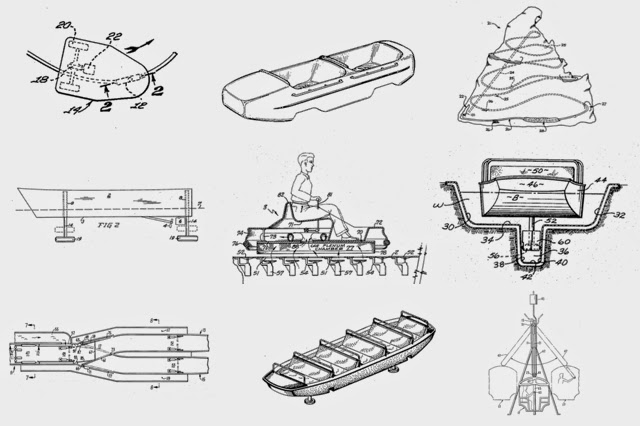 Over the course of his career at Arrow, Karl Bacon was included on six shared and awarded five individual patents:

A closer look at these reveals some interesting details, some of which should be obvious to many current amusement park guests and also offer a glimpse into the trajectory of Karl and Arrow's history.

3,006,286 isn't long as many patents go, only five pages containing eight claims and six figures, most of which detail the pivoting nose-wheel assembly which guides and powers the car. As far as the technology goes, it's clearly descended from railroad trucks, with the exception of the use of a layer of polyurethane on the wheels to quiet the ride.

It is a complex mechanism, with six wheels of three types, a spring loaded electrical pickup, casters and pivots and plenty of machined parts and bearings held together with nuts and bolts. 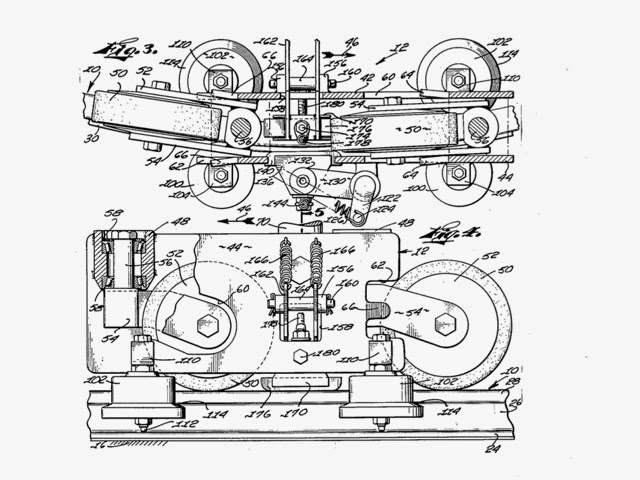 Whereas the Amusement Vehicle Apparatus was for a fairly sedate dark ride, the Bobsled Amusement Ride was a whole system comprising a mountain with significant elevation changes, cars running on twin tubular tracks with an active speed regulation system, including a water splashdown.


As complex and innovative as the Matterhorn was, it paled in comparison to the detail and level of precision required to create the next attraction; US3,251,595 - Air Car and Supporting Apparatus, aka the Flying Saucers.

With 18 Figures spread over 14 pages and 11 claims, the Air Car and Supporting Deck had it all; Pneumatics, Hydraulics, Electromechanics and thousands of pressure sensitive valves which had to automatically open and close at just the right time to keep the saucers flying. Some might say that the Air Car was a bridge too far for Arrow. Karl and Ed knew how important proper valve operation was.  An entire section of the patent was devoted to them which began:

"An important element of our invention lies in the structure and mode of automatic operation of the valves which are closely spaced in each unit."

The operation of the valves isn't that complex, at least conceptually. The valve position is controlled by four things; There is pressure above and below the seal, (orange) a spring (66) and gravity. To move the valve up and close it, apply pressure to Port 2 and the piston moves up. Once closed, the plenum pressure, present everywhere in the chamber, tends to keep the valve closed. When the air car moves by, the increased pressure of the air trapped under the vehicle skirt tends to press down on the top of the valve, forcing it open. Once air is moving by Port 3, the local pressure begins to drop, which tends to reduce the pressure on the top side of the seal (in the blue area) and force the valve back up. (There is also a controlled leak at Port 1.)  If you can get the pressure balance right, all it takes is a little blockage above the top opening and things work. You don't even need to be in a fancy car, any flat sheet of plywood will do.

However, things don't always work in the field the way they do in the shop.  When the system was designed in Mountain View, the volume in the chamber under the air table was larger than when the ride was built in Anaheim. This difference in size caused variations in the chamber pressure that caused the valves to spontaneously open and dump the the saucers and guests. (oops!) Changing the chamber volume was out of the question and the control needed to deal with the variations hadn't been invented yet.

The last ride patent for Disney, 3,404,635, was filed on April 16, 1965 and issued October 8, 1968, almost two years after Walt's death. It illustrates most of the features used on Pirates of the Caribbean. Side by side passenger loading, conveyor belts moving the boats, a rectangular guide in the waterway, followed by a horizontal guide wheel. (9 pages, 7 figures, 12 claims)

With the shift to in-house R & D at Disney and the sale of Arrow to Rio Grande Industries, Karl's direction and focus shifted to other things.  The patents from 1973 thru 1975 were for flume rides, corkscrew style track, the type of two level boat and water control system developed for Pirates and a rotary loading platform.

What is particularly interesting is the scope and scale of the last patent Karl filed; US 3,972,527; Passenger Powered Rotating Amusement Ride (1975), which was a continuation of a previous patent filed in 1974.

The primary object of the invention described in the patent was to provide an improved ride that was simple to manufacture and economical but one which still provides a thrilling experience for the rider.

Reflecting back on the previous ride systems which Karl had created, some of which have never been matched, it's interesting to reflect on how one of the brightest amusement ride engineering minds of the last century reverted to a simple, manually powered swing for it's last patent.

Maybe it's at least partly because we're all going to end up somewhere like this... someday.
Posted by Thinking of Design at 12:29 PM