MOUNTAIN VIEW, Aug 25. - Under construction by Arrow Development Co., 243 Moffett Blvd., is an addition 50 by 48 feet, which will nearly double the square footage of the manufacturing firm's plant.

The firm, established by four men on Jan. 1, 1946, manufactures a wide assortment of metal products, including merry-go-rounds that have won wide acceptance for their sturdiness and serviceability.

"We will be able to assemble our merry-go-rounds under a roof after this addition is completed," said W. J. Hardiman, one of the four partners. The other three partners are Karl. W. Bacon, Angus Anderson and Edgar A. Morgan.

Merry-go-round production has slackened considerably this year because of shortage of materials. The firm is now doing subcontract work for the Federal Government and private industry. One of its products is a grid tamper for tamping concrete floors, produced for Wells P. Goodenough, Inc. a Palo Alto contracting firm.

Even as the new addition is under construction, it is being used for manufacture of an assembly line for loading pallets being produced by McCormack & Co., 680 Martin Ave. Santa Clara. It was designed by Morgan to speed production. Arrow Development men will also supervise its installation in the Santa Clara Plant.


As an example of problems manufacturers face when materials are restricted, Hardiman cited the last three merry-go-rounds the company made. There was no aluminum available, so the horses were made of magnesium.

Although magnesium is lighter and stronger than aluminum, it is liable to crack when welded. Workers solved this problem by heating the horses to 500 degrees before welding.

Posted by Thinking of Design at 7:18 AM 2 comments: 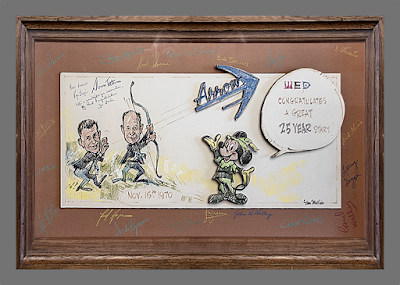 A close look at the signatures and inscriptions is a who's who of Disney leadership.

Working around the matte; Top center is the signature of Roy O. Disney, flanked by John Hench, Dick Irvine and Bob Sewell. Down the right side are the signatures of X. Atencio, Dick Nunis and Card Walker. The left side has Bill Justice. Herb Ryman's is on the bottom.

This is in the personal collection of Dana Morgan, founder of DH Morgan, son of Ed Morgan, and legend in his own right.
Posted by Thinking of Design at 11:06 AM 10 comments: