The Best Laid Plans of A Man and His Mouse

The 1953 prospectus prepared by WED Enterprises for Disneyland, Inc., was drafted by Walt Disney and artist Herb Ryman to give tangible form to Walt's vision. It included nine type written pages describing the features of Disneyland. Three packets were prepared to take to New York in an effort to find a partner to invest $5 million in the project.

Walt's original plan included a number of attractions that were different than what was eventually built, with names like Lilliputian Land, True Life Adventure, Holiday Land, Recreation Park and Mickey Mouse Club Island.  Also included were a sound stage, Prop Building and T.V. Theater, foreshadowing Walt's intention that Disneyland be the site for the creation of a weekly Disneyland TV show and possibly a twinkle in Walt's eye of a working production studio in a Disney Park.

The map is small, 12" x 18", a B size architectural rendering showing the park in an advanced stage of planning. The nine typed pages include statements by Walt describing the park's areas and attractions, occasionally punctuated with ellipses (...) to give the reader's mind a chance to soar.

Fantasy Land stands out as one of the areas most like what was eventually built. The Sleeping Beauty Castle would eventually top out at seventy-five feet. Considering today's multi-year construction schedules, the time from plan to ribbon cutting on Disneyland was more than magic, it was miraculous.

(Note: There are hyperlinks to more stories about Arrow's work on the King Arthur Carousel, Dumbo the Flying Elephant and Casey Jr. Circus train embedded in this posting.)

FANTASY LAND is a wonderful land of fairy tales come true within the walls and grounds of a great medieval castle whose towers loom seventy feet in the air. The the middle of the Castle grounds stands a magnificent carousel in the theme of King Arthur and his Knights.

In this land of fantasy we find the settings from the fairy tales.

WALK-THOUGH the wonderful experiences of ALICE IN WONDERLAND, as the White Rabbit takes you down the rabbit-hole, through the maze of doors, the Rabbit's House, past The Singing Flowers, Dodo Rock, the Mad Hatter's Tea Party, climaxing in the courtroom of the Queen of Hearts.

FLY-THROUGH the air with PETER PAN, over London... past Big Ben clock... beyond the second star to the right for Never-Never Land. Fly over Captain Hook's ship... the Indian encampment... the Crocodile... Mermaid Lagoon... Through Skull Rock...


Reflecting on these words today immediately conjures images from Disney's animated films and scenes from Snow White's Scary Adventures, Alice in Wonderland - which didn't open until June of 1958 as a tracked dark ride - and Peter Pan's Flight.  Pinnochio's story was expressed in ride form much later, as Pinocchio's Daring Journey, which opened on May 23, 1983 in Anaheim. 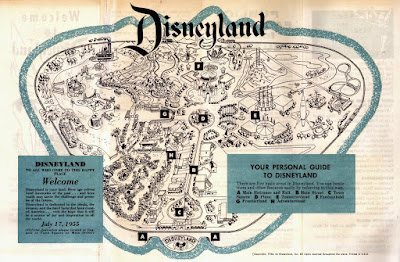 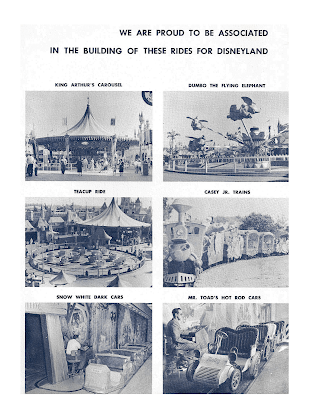 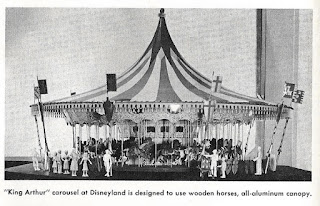 The Snow White vehicles were the product of Arrow Development.

Patterns for Mr. Toad's cars were hand drawn on the floor of Arrow's shop.

Casey Junior was designed to look exactly like he did in the story book. 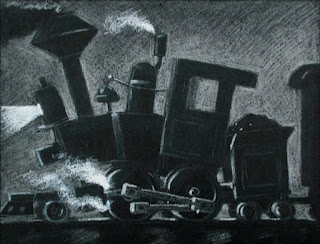 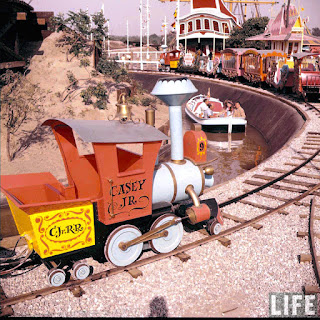 
The tram cars which carried guests from the parking lot to the park's entrance at Disneyland and Disney World were another Arrow Product. They also designed and built the ride systems for It's a Small World (1964/66), Pirates of the Caribbean, Adventure Through Inner Space (1967), and the Haunted Mansion (1969) which were both omni-mover style ride systems.

Arrow has also been credited for improving the guidance system for the Submarine Voyage (1959) and prototyping a four-track version of Space Mountain. Dana Morgan recalled that Arrow was involved in several Walt Disney World attractions, including Dumbo the Flying Elephant and Peter Pan, Pirates of the Caribbean and the Prince Charming Carousel.

The overhead track and drives for Peter Pan in Disneyland was done by the Cleveland Tram Rail Company, but Arrow Development would do the ride system for Walt Disney World.


Mickey Mouse Club Island would become Tom Sawyer's Island and True Life Adventures would remain a dream, but most of Walt's original ideas would not only see the light of day, but become the source of cherished memories for decades to come.

Posted by Thinking of Design at 1:47 PM