Danny the Dragon may not be Arrow's most famous ride system but he may be the best loved. Created for Freedomland, Danny was probably the first amusement park use of guide-by-wire technology, which has since become commonplace in factory automation, but when C. L. Paulus et al filed the patent (2,339,291) in April of  1940. It stated the purpose and subject of the invention as

...a method and apparatus for controlling the movement of mobile bodies and more particularly to an electrically operated signal and automatic steering mechanism for mobile bodies... according to a prearranged course.

The illustrations reveal a system with two magnetic coil pickups and a cable carrying a varying electrical current. 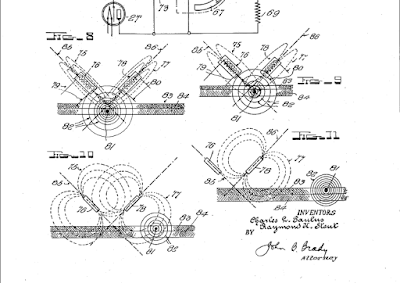 In Paulus' implementation the electrical and mechanical functions are coordinated to allow one or more vehicles to traverse one or more paths automatically without human intervention. Danny did this by following the pulsating electromagnetic field emitted by the buried wire. 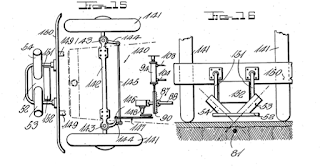 There were at least two Danny the Dragon rides. One opened in June 1960 at Freedomland.  He was bought by Great Escape in Lake George, when Freedomland closed. At the end of 1996, Danny was taken out of service and parked in the maintenance area. San Jose's Happy Hollow Danny opened in March of 1961.

Posted by Thinking of Design at 3:50 AM