Dumbo Under the Hood 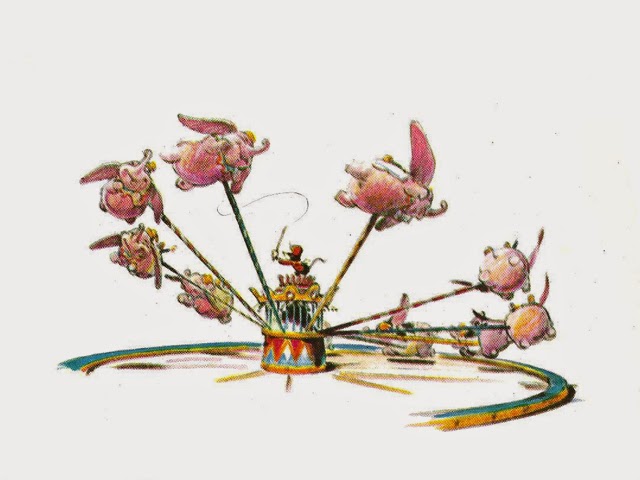 Arrow co-founder Andy Anderson's daughter Carolyn kindly shared this image of the Dumbo attraction concept art. It was provided to Arrow by Disney and has some interesting details which differ from the current configurations.

The official story about the Dumbo attraction reads:

"As a jovial organ melody begins, Dumbo gracefully lifts off from the ground and magically begins to fly round and round above a dancing water fountain. Feel the wind race across your face as faithful friend Timothy Q. Mouse—resting on a decorative hot-air balloon in the center of what looks to be a vintage circus-themed toy—directs the action with help from his “magic” feather."

Werner Weiss's wonderful Yesterland site web page has some terrific photos taken between 1954 and 2006 which reveal some interesting changes over the years. If you do some detective work, there is even more to the story.

Dumbo was one of the opening day attractions at Disneyland, however, the Wikipedia article says that Dumbo opened on August 16, 1955 - a month after the July 17th press opening. The delay was caused by a problem with the system's hydraulics, which had been sized to lift 500 pound elephants that ended up weighing 700.  Karl and Ed explained it this way:

"Disney gave us so much work that we couldn’t do it all... so we hired an engineer to help with Dumbo. He used... accumulators... one for each elephant.  But they would get out of balance, since there was nothing to separate the oil from the nitrogen."

An accumulator is the hydraulic equivalent of a capacitor.  Partly filled with pressurized gas and partly filled with liquid, it is used to smooth out oscillations in the fluid flow and act as a pressure reserve when the pump capacity isn't large enough to handle temporary overloads. The problem is that without a barrier between the hydraulic fluid and the gas, the gas can begin to permeate into the fluid. Then, if the pressure is released, the gas expands and creates foam, like when you first open a bottle of carbonated soda.

The Dumbo lift system was supposed to use pressure in the accumulators to balance the weight of the elephant cars and riders while the main pump provided the power to move them up and down. In theory it was a great idea, but by the time the cars were delivered they'd gained 200 pounds of weight over the original specification, which probably overloaded the system. As the elephants flew up and down, alternately raising and quickly dropping the pressure, the high pressure gas in the fluid began to expand and cause it to foam. There was no way to keep the oil and gas separated the result was that the system became very unstable.

The short term solution was to leave Arrow employee Paul Harvey there to do what Ed called "milking the elephants." Between rides, Paul would drain the system and put in fresh hydraulic fluid. Karl designed a fix, but it delayed the actual opening day by a month.

Other changes include the color of the elephants, Timmy's whip, and moving ears.

In the planing stages there were ten pink pachyderms, patterned after the Pink Elephants on Parade part of the Dumbo story, which explains the color in the concept art above. Walt changed them all to grey, so they all became Dumbo.

The moving ears were also a victim of Dumbo's hydraulic system insufficiency. They were removed as a part of a weight reduction effort, probably because they were easier to change than the main hydraulic cylinders which were upsized in later versions. (See below)

For comparison, here is an image of another type of hydraulic system which Arrow would have been very familiar with, and possibly inspired by from their automobile repair work; 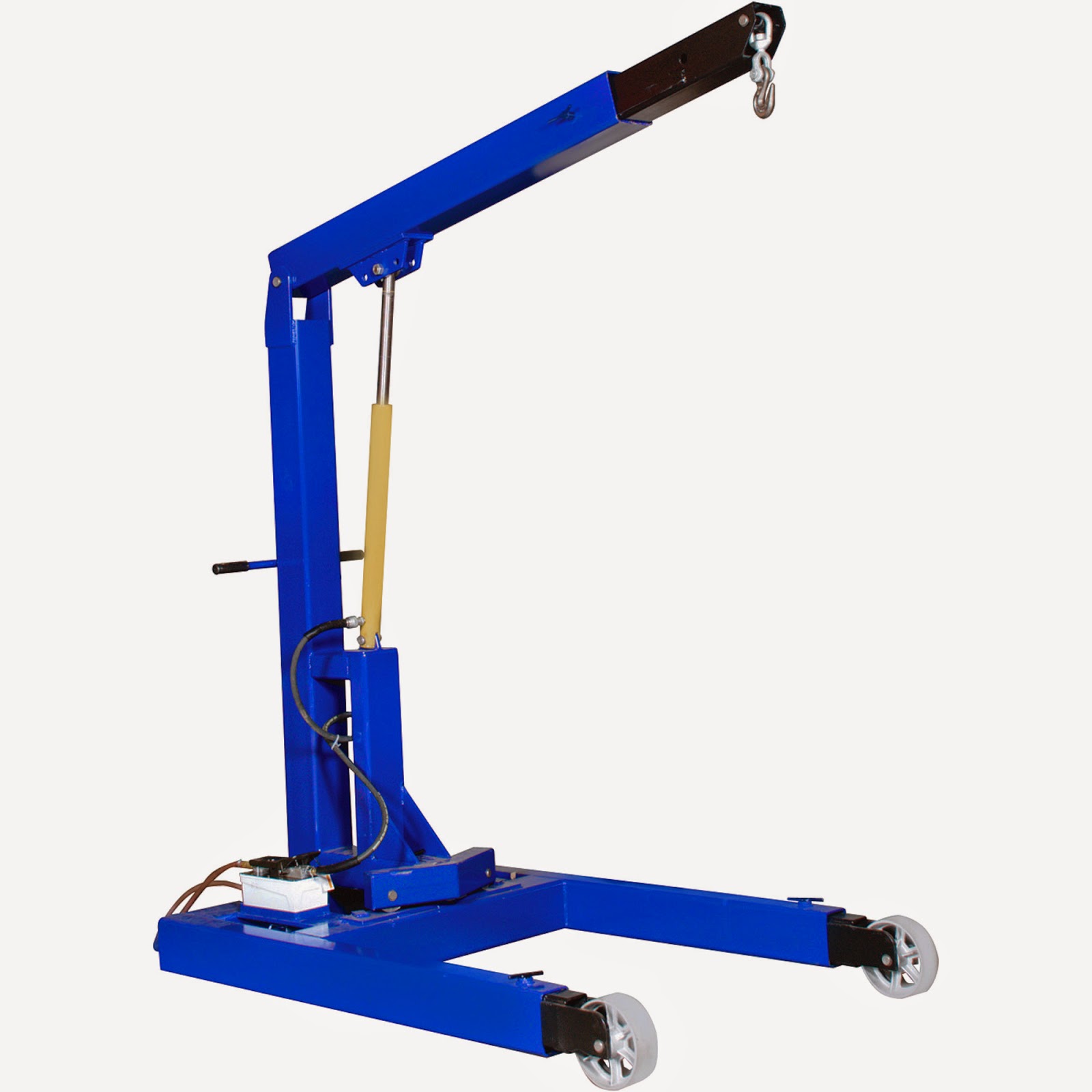 
Eventually it all sorted out, but as the old saying goes; The Devil is in the Details.

By the way, there may be a new Dumbo style ride on the way. Last year, Disney filed a patent (20110312428) for one with airplanes on extensible arms. 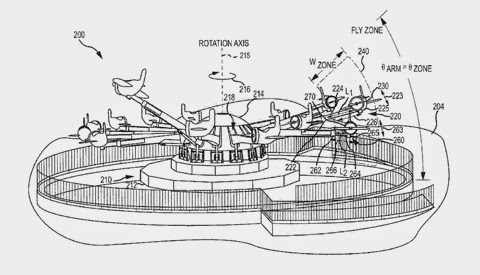 Planes comes to the Magic Kingdom...?

This would mark a return to the granddaddy of this theme of go-round, designed by Clifford F. Kennedy in 1939; 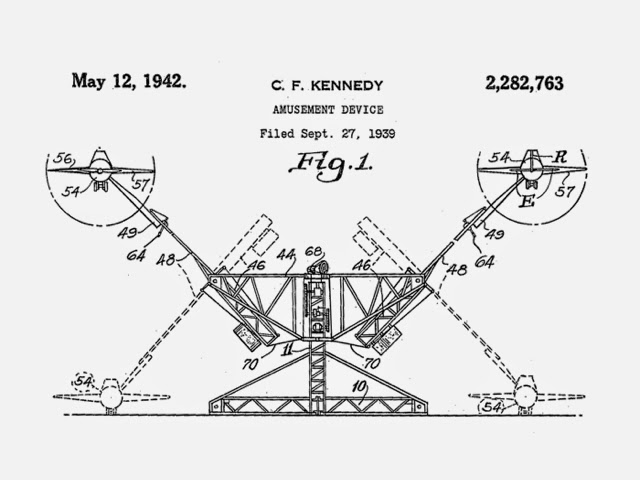 In the mean time, you could try doing one of these in your back yard; 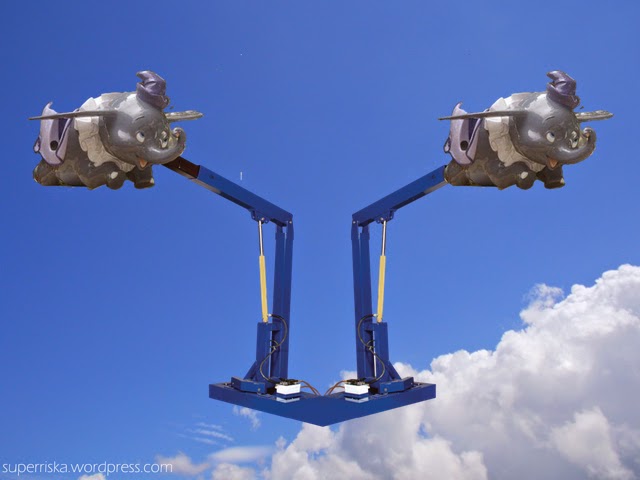 For those of you who can stand a little math, here is a basic static vector analysis just to see the magnitude of overload those 200 extra pounds created; 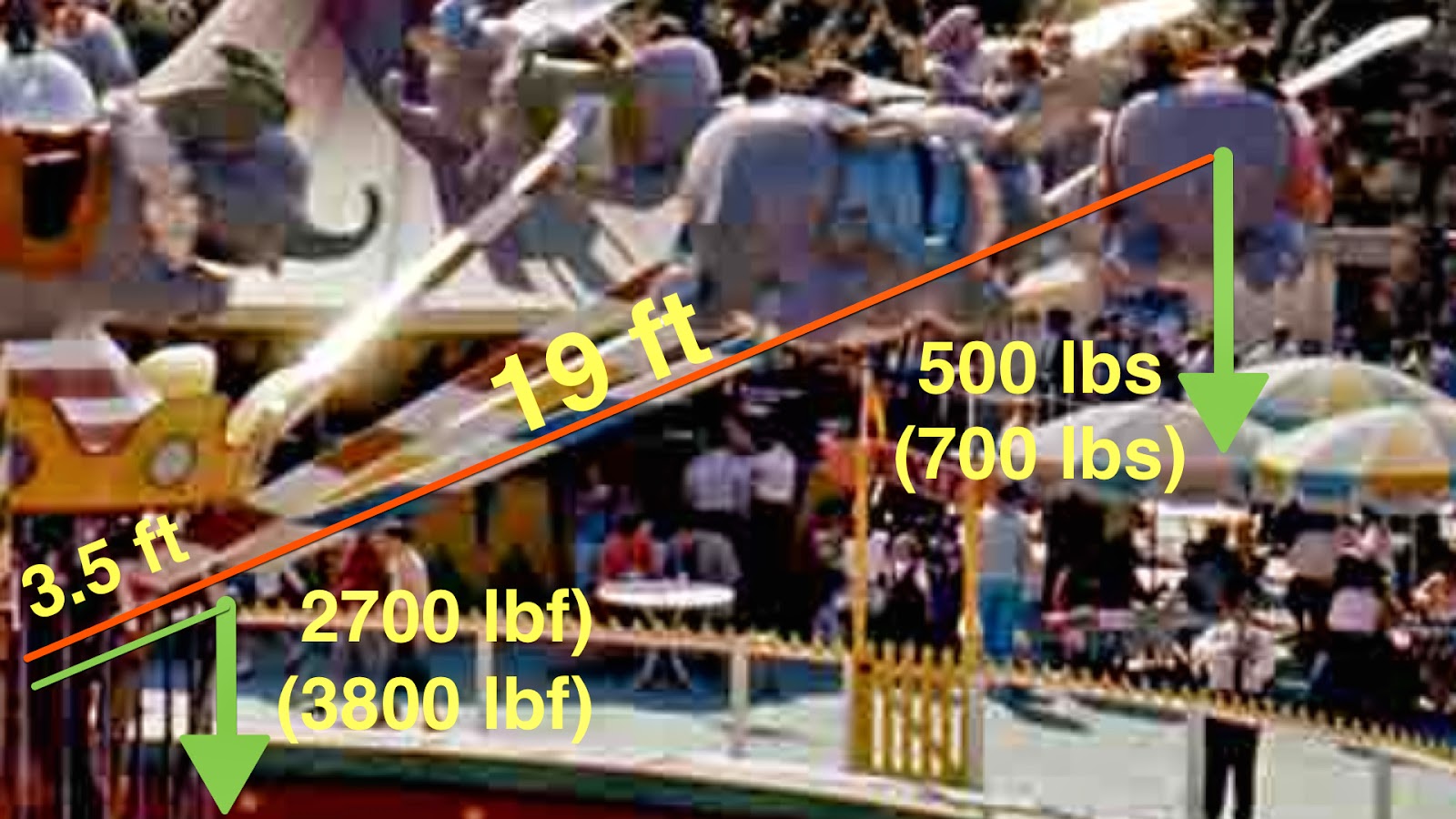 As you can see, what started out as 2700 pounds of force at the lift point turns into 3800 pounds; a 40% increase. Add to that up to 300 more pounds of riders and, well... you get the idea. Which is part of the reason why the later style lift cylinders are fatter and huskier, as shown on the left below.

Posted by Thinking of Design at 7:55 AM