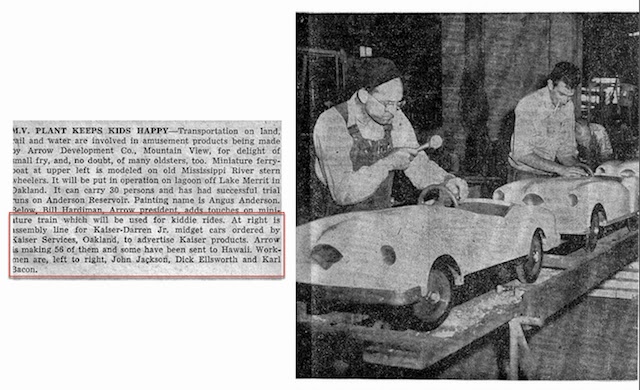 This undated article entitled M.V. PLANT KEEPS KIDS HAPPY features a photograph of Arrow employees John Jackson, Dick Ellsworth and Karl Bacon assembling what looks like Midget Autopia cars, until you read the caption, which states that Arrow has built 56 of them for Kaiser-Darren Jr. midget cars of Oakland, some of which had already been shipped to Hawaii. 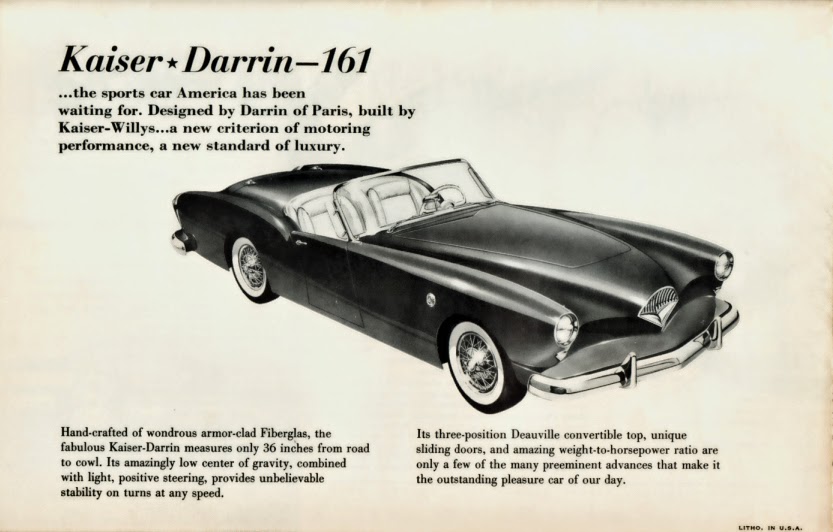 The Kaiser-Darren 161 was a limited production sports car, built in 1954 by Kaiser Motors to compete with European sports cars like the Triumph TR-2 being introduced to the US after World War II. Designed by Howard "Dutch" Darrin, a revamp of Kaiser's Henry J compact, the Kaiser-Darrin was noted for being the first American car with a fiberglass body and doors on tracks which slid into the front fender wells. Only six prototypes and 435 production cars were ever built. 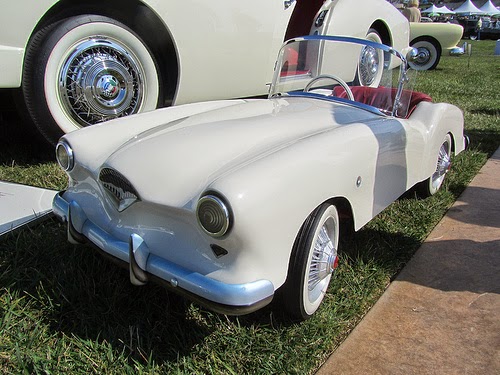 A brief trip to the web (Flickr) turned up this photo of a Kaiser-Darrin kiddie car at a Southern California auto show.

Now, compare all three photos; the Midget Autopia car at the Disney Hometown Museum in Marceline, MO, the kiddie Kaiser-Darren and and a restored Kaiser-Darrin in Arizona.

Perhaps we now we know the inspiration for the body style of the Midget Autopia cars.

I recently came across Wade Sampson's interview where Bob Gurr commented on Arrow Development and the Midget Autopia Attraction.

WS: Marceline is in the process of rebuilding the Midget Autopia.

BG: I had nothing to do with that attraction when it was at Disneyland. It was a stock Arrow Development ride.

WS: Ed Morgan and Karl Bacon of Arrow don’t always get credit for their contributions to Disneyland.

BG: Ed and Karl were guys I really liked to work with. They were so practical and willing to tackle anything for Walt. Joe Fowler was the main liaison between Disney and Arrow. Roger Broggie, Fowler, Ed and Karl all operated as a single force, always productive and never any ego getting in the way. I learned a whole bunch of simplified ways to do production drawing from them that I used for decades afterward.
Posted by Thinking of Design at 10:29 PM