While gathering images and stories for this blog and Building Disney's Dream, I was contacted by someone who claimed that her father was one of Arrow's founders. This came a surprise, as I wasn't aware of anyone except Andy Anderson, Bill Hardiman, Ed Morgan and Karl Bacon having anything to do with Arrow's birth.

There was one photo of several men standing around a miniature car that included Walt Disney, Joe Fowler, Dick Irvine, Karl Bacon and Ed Morgan, but I hadn't been able to identify one man on the far left. It turned out that man was Walter Schulze, who stepped onto Arrow's stage a bit later but filled a vital role in their future success.

Graduating from the Wharton School of Business at the University of Pennsylvania with an MBA, Walter and his wife Pauline were transferred to San Francisco about 1946. Walts' father, Henry, had been a Vice President and ran the Fore River shipyards in Quincy Massachusetts until his untimely death in 1941, so Walter knew a thing or two about ship building.

During World War II, San Francisco Bay Area shipbuilders produced nearly half of all the cargo ship tonnage and 20 percent of warship tonnage built in the entire country, building an average of one ship per day for the duration of the war. Disney fans will also recall that Admiral Joe Fowler was nautically inclined.

In addition to his day job, Walter and Pauline did accounting for several small businesses in the Bay Area, including Dura-Bond Bearing, thru which Walter had heard of Arrow Development. He is the mystery man on the left in the photograph shpwing Disney, Irvine, Fowler, Bacon and Morgan inspecting an Arrow Antique Ford automobile, around 1954. 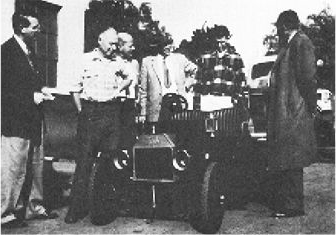 Walter's daughter Linda recalls that her father joined Arrow about 1953, after hearing that one of the founders was interesting in selling his share of the company.  Schulze borrowed $15,000 from his mother Edna and purchased a 1/3 interest. From that time on he became the point man in all of Arrow's business dealings, setting prices for ride systems and filling the role of treasurer and accountant. It was likely the combination of Schulze's business sense, Karl's design skill, Ed's manufacturing prowess and Walt Disney's focus on the customer that laid the foundation for much of Arrow's future success.

Even as late as 1956 Arrow was struggling to achieve profitability. Caroline Anderson Moyers, daughter of Arrow co-founder Andy Anderson, recalls that the contract with Disney for the Fantasyland rides was fixed at $250,000.  She also has a copy of correspondence from her dad to Bank of America, dated April 1956, stating that he was no longer an owner of Arrow. Andy and Bill left Arrow in the mid-50's and eventually started their own business doing residential construction, although they maintained their relationships with Arrow well into the 1970's.

After Disneyland opened, Walt asked about how Arrow had come out on the deal and discovered that they had lost money on the contract. In his classic style, Disney simply wrote a check to cover the difference. Four years later he would buy 1/3 of Arrow in an effort to assure their viability. By 1971, when Arrow was sold to Rio Grande Industries, the company was valued at $3 Million.  Much of the credit for the a 6600% increase in value has to go to Walter Schulze's business acumen.


Linda Schulze had a job as a secretary at Disney in the early 70's and recalls that by that point the relationship between Arrow and Disney had begun to cool. Her father was also looking to retire and spend more time in civic activities - he had been a huge booster of the Rotary Club - and wanted to travel. That had a significant influence on Karl and Ed's decision to sell, as the company had grown to the point that it was no longer possible for any one partner to raise enough personal capital to finance a buyout. Although all three would consult to RGI for a few years after the sale, no new projects were funded during that time. RGI would sell Arrow to Huss in November of 1981.

Walter Shulze died on November 17, 1984 in Los Altos, California. Years earlier, he'd sold off all of his RGI stock. He may have had some sense of what was to come.


Posted by Thinking of Design at 8:04 AM