A Historical Overview of Arrow Development

One of the interesting things about Arrow is how the company changed over the years. If you haven't heard of Arrow before, don't be surprised.  Most of the time they were too busy to worry about advertising and the work they did for Walt was on contract. It wouldn't be until 5 years after Disneyland opened that Arrow would be partly owned by Disney.

You may have heard of Karl Bacon and Ed Morgan, the two founders who Robert Reynolds focused on in Roller Coasters, Flumes and Flying Saucers, but there is a lot more to the story.  In addition to Karl and Ed were Angus (Andy) Anderson and William Hardiman. The early news stories make it clear that the four were co-founders in every respect, sharing the work, successes and failures thru the first 15 years. They even passed around their titles, acting as president, vice president and secretary on a rotating basis.

Their wives also played a role from the start, as this fall 1945 photo attests.  In fact, if not for Phyllis Anderson's (fourth from the left below) faithful clipping and preservation of the photos, newspaper articles and brochures from those early days, a lot of this retelling might not have even been possible.

Arrow Development incorporated in the state of Californina on November 16, 1945. From then until 1956, Anderson, Bacon, Hardiman and Morgan were the core team.  About 1956, Anderson and Hardiman would leave to start their own construction company. Walter Schulze bought a 1/3 interest in Arrow around that time, borrowing $15,000 from his mother Edna. Until then, the accounting had been one of Bill Hardiman's primary roles.

Schulze appears on the far left in a photo of Walt Disney inspecting one of Arrow's vintage cars. (Walt is on the far right.) Before that, he and his wife Pauline had done accounting for Dura Bond Bearing, who's owner gave Arrow $5000 worth of work to tide them over when Luscombe Aircraft went bankrupt in 1948. At that time, Arrow was building parts for an aircraft crop dusting kit.  In 1957, Schultze was managing Arrow's ill fated Playtown Kiddieland project in Palo Alto. For more details on Walter Schulze's significant role at Arrow view our posting on him. 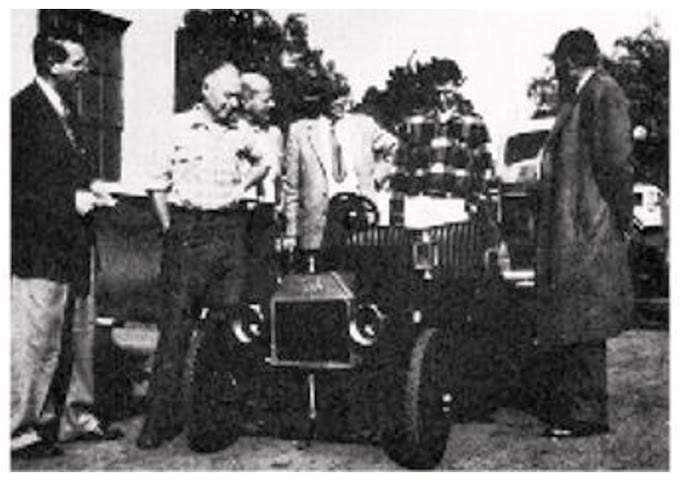 Walt Disney was so committed to Arrow's success that he bought 1/3 of the company in 1960.  The May 20th issue of Film Daily had an article entitled; Disney Buys Interest in Outdoor Amusement Firm. The purchase would come after over three years of relationship building between Walt's and Arrow's staff and owners. With such a huge role in the development of those early rides, Disney did not want Arrow's future to be in doubt.  Interestingly, Arrow suffered from some of the same cost estimating issues that plagued Disney during their early years, with development costs often exceeding estimates and profit margins slim to none.

In 1965, Ron Toomer was hired to work on water flow issues on Disneyland's Pirates of the Caribbean and engineering for the Run-A-Way Mine Train at Six Flags Over Texas.  Ron was the first degree'd engineer at Arrow, having graduated from the University of Nevada in 1961 with a BSME.

In 1971, Dick Nunis, then chairman of the Disney Park Operations Committee, informed Ed and Karl that with the opening of Central Fabrication Shops in Orlando, Disney would be bringing the ride development efforts in-house. The next year Karl and Ed would sell Arrow to Rio Grande Industries. In 1977, Arrow would open a 120,000 square foot manufacturing facility in Clearfield, Utah. By 1980, they were no longer operating in Mountain View and Ed and Karl were both in retirement.

In 1981 Huss Maschinenfabrik purchased Arrow from the Rio Grande, merging the two entities to form Arrow-Huss. The company would start having financial difficulties, partially due to investing heavily in the Darien Lake theme park and the 1984 Louisiana World Exposition.

On January 2, 1981, Dana Morgan (Ed's son) would file an application for a Certificate of Authority to operate in Utah for Arrow Huss, Inc., listing Klaus Huss, Urs Affolter and Robert Peers as Directors and himself as President. Dana estimated Arrow’s gross worldwide business transactions for '81 at $8 million and the value of the company at $5 million, however his revenue projection for operations in Utah for that year was zero.

By March of 1984, control of Arrow shifted entirely to Bernd Zwickau and Boyd Draeger.  One year later Arrow-Huss, Inc. filed for bankruptcy.

The December 31, 1985 Utah restated certificate of incorporation would change the company name to Arrow Dynamics, Inc., with a valuation of $12 million and Norman Scott, Ronald Toomer, Otis Hughes, David Klomp and Ray Crandall as Directors.  From 1986 forward, the company would operate as Arrow Dynamics.

As part of the bankruptcy agreement, Arrow Dynamics was limited to engineering. A sister company, Fabriweld, was formed and located right next door in the Freeport Center. Mostly composed of ex-Arrow employees, and incorporated on June 29th, 1987, Fabriweld made track for Arrow and Vekoma, which was acting as Arrow’s European distributor. Over the next ten years Arrow Dynamics would produce some of the fastest, largest and highest roller coasters in the world, but struggle financially on the big rides, mostly due to the high cost of R & D.

In 2000, Ron Toomer retired.  On December 3rd, 2001 Arrow Dynamics would file for bankruptcy with $ 2.2 Million in debts. Their last project was the supporting tower for the 2002 Olympic Cauldron.

As of 2014, S & S continues to develop amusement park rides and has a web site at engineeringexcitement.com.

1945 to 2001 isn't a bad run, by any measure.  Thanks for visiting and helping us keep their memory alive.  Please tell your friends about the blog and help spread the story.


(Thanks to Kevin Russell and Carolyn Anderson Moyers for the images of the Stock Certificate and foundation celebration.)

Posted by Thinking of Design at 4:36 AM